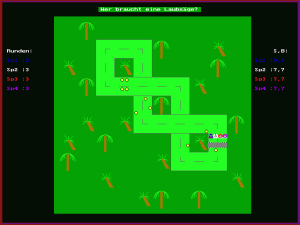 Battle Race is a car racing game for old MS DOS systems, later succeeded by Battle Race 2. Win races to buy better cars and to advance to the next planet! You can shoot or plant mines on the track to stall your enemies, which gives you the change to advance and win the round. But be careful, the enemies are not sleeping! Each win gives you money to spend on new cars or more shooting power.

There are 9 planets with 9 tracks each and 10 cars to buy. All cars have mines and one of three different shot types (normal, fast, tracking). Your car is originally equipped with one mine and one shot, but can during the game be upgraded to 9 mines and 9 shots.

You can play single or with two players on the same computer, both using the keyboard. Race against 2 or 3 computer enemies. For extra fun, there is a “last man standing” battle game, which you can win if you stay alive with being hit at most 4 times.

To save your game, just write down the given pass code, with wich you can resume any game later.

This game was created in 1998 for MS DOS, when computers were significantly slower. If you have troubles running Battle Race on a modern computer, try running it using the DOSBox emulator.

I programmed Battle Race in Turbo Pascal 7 at the age of 14, in 1998. Development took me about 6 month, resulting in about 7000 lines of Pascal code, including the self written car and track editors.

All graphics were programmed using the Borland Graphics Interface, no other external libraries were used. All that without the help of the Internet.

Without the Internet being available, there has not been a real release of this game even though I tried to sell it as Shareware.