Chicken Tournament is a 3D ego shooter for Windows, which I created as a one-man-project during highscool, between June 2002 and July 2003. The idea had a friend, who came to me and said, “please create a game, where I can kill chickens with a harvester!” Great idea:

The result is a fun and insane multi player game for Windows, where farmers and chicken fight each other. The game is so small, it fits on a historic floppy disk and it does not need to be installed.

Chicken Tournament is freeware and even has its official facebook page.

A beta version of Chicken Tournament for Android can be found in the Google Play Store.

Please read the README.TXT file in the ZIP archive. It contains important information about the game.

Chicken Tournament has a very simple game play. There are two classes who fight each other: 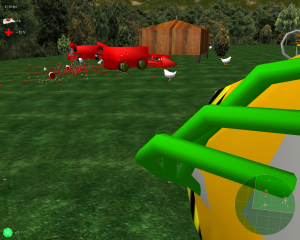 The farmer can run and jump. He can use one of the available weapons layout around in the 3D world:

A farmer can pick up health packs to refresh their energy up to 125%. The farmer is forbidden to enter the chicken coop. 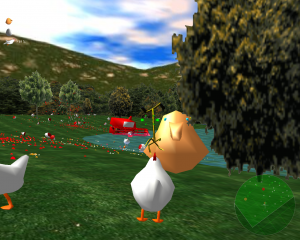 Chicken can run, but not jump. They can throw eggs at the farmer, slowly draining his energy. To generate eggs, chicken can breed but they are vulnerable and cannot move, so they should try to find shelter in the chicken coop, where the farmer is not allowed. Breeding in the chicken coop is also faster than outside in the wild. Instead of breeding, chicken can pick up egg-packs, which lay around in the area.

Chicken have so little energy, they are immediately dead when hit by the garden claw or the harvester. When lucky, chicken are pushed away by the golf club or the plasma cannon and survive instead of being killed. 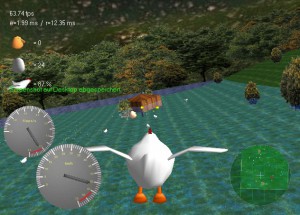 Chicken can fly when they have enough flying power. Flying takes energy, so they can only fly for a limited time, needing to regenerate on the ground, preferably in the chicken coop. You can fly kamikaze attacks on the farmer, killing the chicken, but taking a reasonable amount of energy from the farmer.

The game focuses on multi player mode; there is no single player campaign. It can be a lot of fun in multi player mode, because of the inequality of the two teams. You need about 10-15 chickens to combat one farmer. 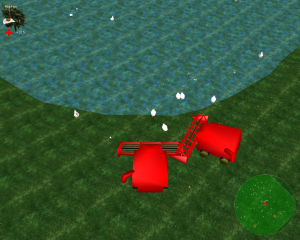 You can also play with/against intelligent computer enemies, chicken as well as farmers, and you can customize the rules and settings to make it more fair for both parties.

Unfortunately, there is no master server available, so to play peer to peer, you need to know the IP address of your friends.

Chicken Tournament basically was a one man project. Development took 13 month, including the intro video, music and graphics. The result is a game with about 20000 lines or 460kb of code. I started working on Chicken Tournament in June 2002 at the age of 17, during my last high school year. In October 2003, the game was published as a game on the PC Action CD with a half page article in the magazine.

The game is written in C++. The engine is completely self written, using DirectX-7 for user interaction (Direct3D, DirectDraw, DirectSound, DirectMusic, DirectPlay, DirectInput) and does not rely on any other external libraries.

The full Source Code of Chicken Tournament is available on GitHub.