Blokus is an attractive and simple board game, original published by Sekkoia. During a course of Software Engineering at the FH-Münster, advanced students of computer science had to create a software version of this board game. 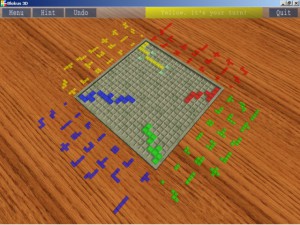 This is the result of two collegues and me, developed during this practical training, during spring 2005, later released as an open source project with the name Freebloks 3D.

The game is written in C++, uses OpenGL and supports Windows and X11 based Unices like Linux, FreeBSD, MacOS X and Solaris.

Freebloks 3D comes with a dedicated server, full IPv6 and multiprocessor support. There is a dedicated server running at blokus.saschahlusiak.de. The game supports up to 4 human players at one computer as well as team playing .

A network compatible Android port of Freebloks 3D is available, one of the most popular implementations of Blokus for Android: https://play.google.com/store/apps/details?id=de.saschahlusiak.freebloks

This source code is distributed under the terms of the GPLv2.