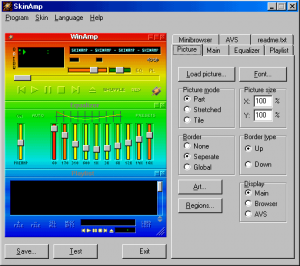 Skinamp is a Windows program, which allows you to automatically generate a classic skin for Nullsoft Winamp, compatible with other popular players like XMMS or  Audacious. The program takes a source image file, like bmp or jpeg, and generates a matching Winamp skin, either as a folder of bitmap files for post-processing, or as a final Winamp-Skin-Zip (WSZ) archive. Skins can be saved and loaded in an internal format to allow continuation of work. As a nice bonus features, previous of the current skins can be exported as an image file. 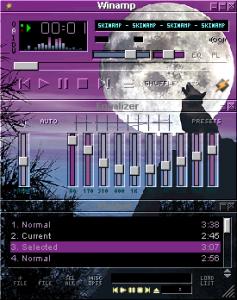 The program skins nearly all; main, equalizer, playlist, mini browser, avs, and the config files (viscolor, regions, playlist, readme, …). The source image can be transformed and resized to match within Skinamp.

The internal regions editor allows for non-rectangular windows and with the cursor editor you can create custom cursors.

Skinamp 1.15 is the final version! There will be no more bug fixes, improvements or language updates!

Skinamp is written mostly in Borland Delphi 5, using a helper library written in C++. The final version contains about 12000 lines of code, parts of it can be obtained on request.

German and English languages were provided by me, the other 31 languages were supplied by the community, since Skinamp used a simple text file to translate the user interface.

I started working on Skinamp in late 1999, first versions being available early in 2000. After Skinamp was officially mentioned in the Nullsoft Developer Network (NSDN) on September 28th, 2000, it got a steady download rate of 200 per day.

“I just played around with your skin maker and it is very cool.  I had a great time making skins to pass around the office.” – Jonathan Ward (NSDN)

“Thank you VERY MUCH for your tool!” – Denzil Kriekenbeek (dev relations mgr, Nullsoft)

Numerous skins were created with this tool, swamping the skins download section of winamp.com, which once only had unique and high quality skins.

Sorry for the inconvenience…